Mission Statement: To protect and prepare our community by developing the capacity of the local public health system to respond to a bio-terrorist event, infectious disease outbreak, and any other public health emergency, and to sustain a continuous preparedness program.

What is Public Health Emergency Preparedness?

Cameron County Public Health – Public Health Emergency Preparedness (PHEP) Program is a program funded by the Texas Department of State Health Services (DSHS) to perform disease surveillance and public health emergency preparedness activities in support of the PHEP Cooperative Agreement from the Centers for Disease Control and Prevention. This includes building partnerships and collaborating within, between, and among public health and medical care partners, emergency management, law enforcement, school districts, and other partners in preparedness activities. Partnership opportunities may include, but are not limited to, plan development or updating, exercises, training, and responding to incidents, events, or emergencies.

Epidemiology is the study of health in populations to understand the causes and patterns of health and illness. The Epidemiology Division of the PHP Program conducts surveillance (the collection and analysis of data) and performs epidemiological investigations to follow disease trends, assess risk of exposure, discover the common source of illness, and put effective preventive measures into place.

Health care providers, hospitals, laboratories, schools, and others are required to report a person or persons who are suspected of having a notifiable condition to the local health authority or the department and provide all information known to them concerning the illness and physical condition of such person or persons.

Most notifiable conditions (see list below), or other illnesses that may be of public health significance, should be reported directly to the Cameron County Public Health using the CCEPI-1 form below.

The following table describes some of the resources available to healthcare providers and the general public can obtain more information regarding the Zika Virus:

Zika virus is primarily spread to people through mosquito bites. The virus can be spread from mother to child. Spread of the virus through blood transfusion and sexual contact has also been reported.

Most people infected with the virus have mild or no symptoms. For those who do develop symptoms, illness is generally mild and typically lasts a few days to a week. The most common symptoms of Zika virus disease are fever, rash, joint pain, and conjunctivitis (red eyes).

Zika virus is transmitted to people primarily through the bite of an infected Aedes species mosquito (Ae. aegypti and Ae. albopictus). These are the same mosquitoes that spread dengue and chikungunya.

– From Mother to Child

– Traveling To Areas with Zika

Most Texas cases of Zika are related to travel. People were infected while visiting areas where Zika is being spread and then diagnosed after returning home. To help prevent infection, DSHS recommends:

During your trip –
Travelers to areas affected by Zika should avoid mosquito exposure.

After your trip –
All travelers returning to Texas from areas affected by Zika should avoid mosquito bites for 21 days following their return or following the onset of illness.

What is the Strategic National Stockpile?

Cameron County’s Strategic National Stockpile is a nationally sponsored repository of life-saving pharmaceuticals and medical materiel/supplies that are available to protect the American public if there is a public health emergency (terrorist attack, flu outbreak, natural or technological disasters) severe enough to cause local supplies to run out. Texas has standing policies which govern and mandate the receiving and distribution of SNS supplies throughout the state quickly and efficiently. Cameron County SNS (CCSNS) has predetermined, distribution sites through-out the county, allowing for the efficient distribution of life-saving vaccines, medicine, and supplies within a 48 hour window. CCSNS has partnerships and plans with: local ISDs, hospitals, clinics, and businesses in order to facilitate emergency distribution operations.

Operation Lone Star Operation Lone Star (OLS) has been in practice for over 18 years. It is a full scale exercise of our medical counter measure plans during which we partner with the Texas State Guard, Cameron County ISDs, DSHS Region 11, and various local volunteer schools/organizations to provide free medical services to Cameron County residents. In planning, CCPH will chose different SNS Distribution sites to practice our plans. Interested in volunteering during Operation Lone Star? Contact us at 956-247-3636. — Learn more about SNS here.

Training Resources
Cameron County Public Health educators/epidemiologists are available to hold informational presentations or trainings on health-related topics. Our trainings may qualify for CEUs and trainings with certificates of completion. Presentations conducted by PHEP staff: If you do not see a topic you are looking for, please call our main office line at (956) 247-3625. 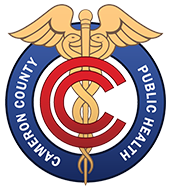